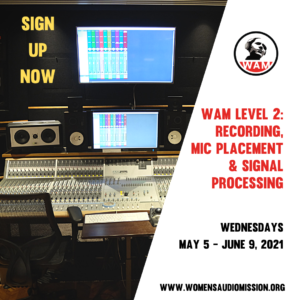 This is an intermediate level course for students looking to gain additional knowledge of recording in a professional studio. Classes include a combination of lecture and hands-on learning. Attendees should understand signal flow, types of microphones, and a basic understanding of recording and mixing going into this course. WAM’s level 1 class is a prerequisite or equivalent basic recording training. All classes will be held via zoom.

Mary Ann Zahorsky is an engineer/producer with over 25 years experience in the recording industry. She has worked on projects ranging from Howard Wiley’s 2nd Line, Afro-Cuban jazz, Whitney Houston, and MC Hammer, to soundtracks for independent films and TV post work on ad campaigns such as Levi’s and Taco Bell. Within the Recording Academy leadership, Mary Ann served on the National Board of Trustees and led the San Francisco Board as Chapter President. As an educator, Mary Ann has taught studio recording, production, entertainment business and audio post production at Expression College and at San Francisco State University. She especially enjoys working with emerging artists and engineers and the energy they bring to the evolving field of music. Mary Ann also grew up playing classical violin and for many years has participated in Traditional Mexican Son and classical African music ensembles. She holds a BA Music from University of California, Berkeley, and a Masters in Education from University of San Francisco.