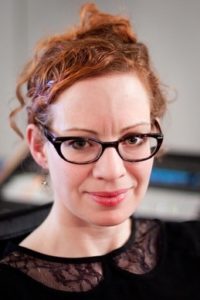 This workshop will serve as an introduction to archiving and preservation work in the audio field. Participants will be taken through an average day of work for a restoration engineer, and also given a practical takeaway to archive/preserve their own audio creations. Useful to musicians and engineers alike!

She has cleaned, digitized and restored rare vinyl and cassette recordings for Awesome Tapes From Africa and many Numero Group complications. (She wrote about restoring Ata Kak’s cassette Obaa Sima for Pink Noise.)

In her previous career as a radio producer, she interviewed drummer Max Roach and the organ player at Fenway Park for WGBH. She has spun records and CDs on the airwaves of WGBH, WFMU, WZBC and WESU.