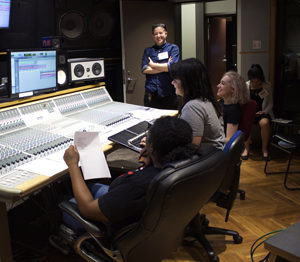 Learn to use all of the gear and systems in WAM’s professional recording studio. From large format consoles to patch bays, complex headphone systems, microphones and signal processors. Learn the signal flow and how to properly connect gear in a multi-room recording studio.

GET YOUR TICKETS HERE!

Terri founded WAM in 2003 while she was a tenured Professor and Director of the Sound Recording Arts Program at City College of San Francisco from 2001-2011. Her love of music and the recording arts spans 25 years as a songwriter, composer, recording engineer, and producer. Winston was signed as a recording artist, engineer and producer by Polygram and BMG subsidiaries, and has shared the stage with such acts as P.J. Harvey, Pixies, Throwing Muses, Flaming Lips, Fugazi, Cake, and Third Eye Blind. She has collaborated with Lenny Kaye of the Patti Smith Group and Greg Hawkes of The Cars and worked as a recording artist and producer for MainMan whose roster also included David Bowie, John Mellencamp, Lou Reed, & Iggy Pop. Winston has composed and produced theme music for KRON-TV’s “First Cut” series, Banana Republic and for various films that have shown on BRAVO’s Independent Film Channel, French Television’s Cine Cinemas and major festivals all over the world. She is a founding member of the seminal San Francisco band Her Majesty the Baby,  has received numerous awards including an ASCAP songwriting award, Boston Music Award and Bay Area Music Award, is a voting member of the Recording Academy (The GRAMMY’s) and is active in the Producers and Engineers wing. She has most recently produced/engineered Kronos Quartet, the SHE’s and master world musicians from around the world. Winston has a B.S. in Electrical Engineering from Purdue University.