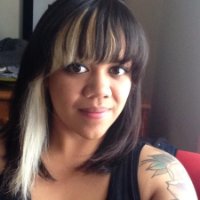 I have been a member of Women’s Audio Mission since I moved to San Francisco in 2011.  At the time I knew nothing of sound engineering, but wanted to learn.  I took their Intro to Music Recording class and knew I had to become a member.  The tools they provided me and the techniques they showed me helped me grow into a very knowledgeable and confident sound engineer.  WAM also introduced me to many talented people in all fields of sound who have inspired me to keep pursuing a career as a sound engineer.  Through these connections I have been offered many jobs and now I am a professional live sound engineer currently working at El Rio night club and a freelancing music recordist/mixer, production sound mixer and post production sound designer.

I recently graduated with a BA from San Francisco State University from the Broadcast and Electronic Communication Arts department.  I am currently woking on a short film called Dreality as the sound designer and have been doing production sound for a documentary about a famous Bay Area artist.  I also just got done recording and mixing a live radio performance for a band called End of Summer that got nominated for an award.  WAM also introduced me to an amazing job as a Contract Critical Listener for Dolby.  Thank you WAM for all your support and being a huge part of my success!