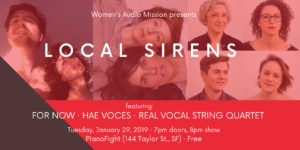 Local Sirens is a free, quarterly music performance series presented by Women’s Audio Mission featuring emerging and established local woman-identified (transgender or cisgender), non-binary or gender non-conforming artists. This January 2019, Local Sirens kicks off with a showcase of classically trained musicians who venture far outside of the box, exploring electronics, pop, and folk idioms, to create original compositions and arrangements.

Real Vocal String Quartet was founded by violinist and vocalist Irene Sazer in 2004. An original member of the famed Turtle Island String Quartet, Sazer wanted to combine her musical passions including chamber music, improvising, composing, and singing. RVSQ are a string quartet, a vocal quartet, a string band and jaw-dropping improvising world-music collective. They play Appalachian fiddle tunes and Brazilian choros, original chamber music and wild improvisation. They backed up Feist on her indie-pop LP, Metals, which Jon Pareles of the New York Times named his favorite album of 2012, and appeared with her on the Tonight Show with Jay Leno. Rik Malone of KQED Arts has described their music as “by turns beautiful, haunting, mesmerizing, and foot-stomping fun.”

Hae Voces is the lovechild of multi-instrumentalists and composers Kristina Dutton & Majel Connery. Too complex to be ambient, and too atmospheric to be rock, the band’s sound is a marriage of proggy, dreamy and arty, side-stepping verse/chorus form in favor of massive, shifting textures and lyrical climaxes. Latin for “these voices,” the band pays homage to their classical training. Their detailed arrangements, however, are as likely to obsess over the analog graininess of these instruments as their digitalization, multiplying the raw power of voice, violin, and a bevy of synths, vocal processing and other effects, into an orchestra of sound. After performing in Chicago and New York under different guises, the two women found one another in the Bay Area through a combination of serendipity and fate. The duo was born shortly after a fortuitously timed email led to a blissful 4-hour jam session for 4,000 people. As a violinist, Dutton’s rigorous classical training led her toward a brief career in orchestral work, but she soon gave herself over to her love affair with the art of pop music, writing string arrangements for indie bands and performing with rockers like Glen Hansard, Peter Bjorn and John, and the Autumn Defense. Connery, a former musicologist, is best known as founder of avant-garde opera company, Opera Cabal, which, in its turn, is best known for a premiere at The Kitchen that contained so much nudity and duct tape it triggered a double review in the New York Times. Hae Voces is based in San Francisco.

For Now is Zeina Nasr and Alex Vittum. They’re based in Oakland, California, and they make incisive and oceanic pop songs that challenge the heart and mind.