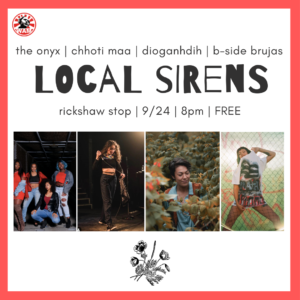 The Onyx is an all black female music ensemble. This collective of women came together to solidify unity among women of color and to provide an artistic outlet for the female voice to be heard. Hailing from and recalling styles of Oakland, Atlanta, New York and Chicago, this eclectic group brings soul, rock, funk, and latin music to an electrifying peak that will have you on your feet!

Dioganhdih is a queer indigenous hip-hop artist and producer making waves in space where cis+heteronormative culture often remains unchallenged. Shouldering the strength and resilience of their Kanien’kehá:ka and Tsa’la’gi lineage, Dio’s vocal and hip-hop performance is a poetic and lyrical affront to colonialism. Dio’s vision is reflective of their Haudenosaunee ancestors inherent honoring of the Earth and commitment to intertribal relations, civic art and cultural engagement.

B-Side Brujas are an all female, all vinyl Group. They bring that fire to the tables, to make you move and groove. We do it for the music and our past and present sistahs. Specializing in weird songs that’ll turn you on.