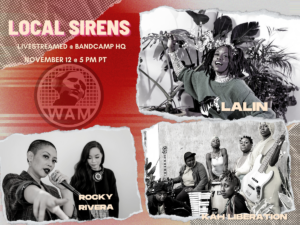 Local Sirens, presented by Women’s Audio Mission, returns for a night of music, streaming live from the Bandcamp HQ in Oakland!

Location: Online. RSVP for the livestream on The Seshen’s Bandcamp page!

Lalin St. Juste‘s roots meet at the crossroads of the Western world. She dances as sounds slither in her mouth; painting the world with words birthed from a spirit veined with ancestral magic. Commonly described as “mesmerizing” and “hypnotizing” when she performs, St. Juste shifts the atmosphere with her voice, inviting you into her cosmic underworld. Lalin has always been drawn to sound as a vehicle for healing.. At the age of six, she learned to sing through grief – intuitively using her body and her voice as a channel to access dimensions beyond the physical world. Her musical evolution included taking risks to season herself as a singer-songwriter – she spent months donning the guitar to play on sidewalks and cafes. The payoff was inspiring and Lalin joined Haitian folklore group Rara Tou Limen and co-founded Bay Area’s melodic sweethearts, The Seshen, a genre-expansive six-piece band who has shared stages with Hiatus Kaiyote, Ledisi, Tank and the Bangas, and more. In 2021 Lalin will release her debut solo recordings on 7000COILS, a queer + black-owned indie record label she co-founded with KKINGBOO centering the African diasporic experience through the creation of intentional and innovative digital and live portals.

Rocky Rivera is an emcee and performance artist from San Francisco. Her early beginnings as a journalist in publications such as Mass Appeal, The Source and Rolling Stone inform her music, as she describes her progressive upbringing growing up in the Bay Area. Rocky has released two mixtapes, four albums and nine joint projects with DJ Roza under the Rock & Roz series on Patreon. Her latest album, Rocky’s Revenge, is available now for purchase on all digital platforms. Rocky’s music is a journey into the spirit of resistance, blending social justice, feminism and West Coast-style hip hop into thought-provoking anthems with timeless appeal.