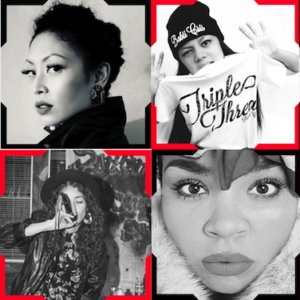 Rocky Rivera – Rocky Rivera is an accomplished journalist-turned-emcee whose editorials appeared in XXL, The Source and Rolling Stone Magazine before she decided to perfect her own musical craft. Her debut album was released in 2010 and since then, has garnered critical acclaim and press coverage from VIBE, 2DopeBoyz.com, Refinery29, and numerous music blogs across the web. In 2012, Rocky became the only female artist at the VIBE HOUSE’s Respect The West Showcase at the SXSW Festival, sharing the stage with West Coast favorites such as Nipsey Hussle, Strong Arm Steady, Snoop Dog and Kendrick Lamar.

Camille Safiya –  Camille Safiya is an artist in the purest form.  From an accomplished painter, to pushing out amazing music, she creates to touch lives.  Camille Safiya is for the people, for the most common woman to the most intricate personality.  As a young revolutionary spirit she grew up traveling the world with her mother’s Feminist movement, protesting again domestic violence and global civil rights issues before she could even walk.  Her music today is a melting pot of all she’s learned from her family and world travels.

Xiomara –  From Berkeley, California native, Xiomara, music is not just a choice – it’s a calling.  Her unique sound was born under diverse influences, ranging from Afro-Cuban folkloric rhythms to Jazz and Classical masterpieces.  Xiomara’s avenues of expression range just as broadly: whether her own composition, taking the lead on a cover, as resident artist on a Hip-Hop recording, or inspiring a community protest in song, Xiomara infuses her every offering with a powerful, raw emotion.

Chhoti Maa – CHHOTI MAA was born out of a tradition of migrants in Guanajuato and forced by the Mexican post-NAFTA exodus into movement. Her raps have roots in her grandmothers poetic recitation and in Mexican oral tradition. She developed through poetry and got training in gospel and soul singing in Albany, Georgia. CHHOTI MAA’s music deals with decolonial living, migrant swag and reconstructing the womyn temple. CHHOTI MAA is a cultural producer-organizer, educator, bruja, writer and artist.