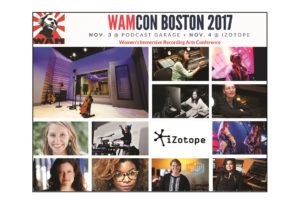 WAMCon is an interactive recording conference for women (transgender or cisgender; non-binary individuals are welcome) presented by Women’s Audio Mission and sponsored and hosted by iZotope and PRX Podcast Garage.

**SPECIAL BONUS – first 50 women to register for WAMCon will also get to attend:

**IMPORTANT NOTE: Only the first 50 women to register for WAMCon will get tickets to attend the podcast event due to limited seating.**

Erin Barra – Erin is an educator, songwriter, producer, multi-instrumentalist and music technology consultant. Specializing in music technology integration, she works with artists/bands looking to integrate laptops and digital technologies into their writing, production and stage setups and has developed, taught and executed several music technology curriculums at the open source (Coursera, and ROLI), K-12 (Beats By Girlz), and collegiate levels (Berklee College of Music, Berklee Online).

Laura Escude (Alluxe) – International music producer, DJ, controllerist, violinist and live show designer Laura Escudé aka Alluxe has been an important figure in some of the most revered concerts around the globe, DJing, programming and designing shows for the likes of Kanye West, Jay Z, Miguel, Charli XCX, Demi Lovato, Iggy Azalea, Yeah Yeah Yeahs, Herbie Hancock, Cat Power, Bon Iver, Drake, The Weeknd, Silversun Pickups, Garbage, Childish Gambino and M83. Escudé is a classically trained violinist, an Ableton Certified Trainer and is the CEO of Electronic Creatives, a team of some of the most talented and sought after programmers and controllerists in the business.

Cynthia Graber – Cynthia is half of the team behind Gastropod, a podcast that looks at food through the lens of science and history. The show has already been honored with awards from the International Association of Culinary Professionals and the Radio Television Digital News Association. For nearly 20 years, Cynthia Graber has reported on a variety of subjects for both radio and print, employing her interviewing and foreign language skills and interest in the world around her to reach the heart of any story. During 2012-2013, she had the opportunity to join a group of 12 international journalists as a fellow in the Knight Science Journalism Fellowship at MIT.

Kerri Hoffman – Kerri Hoffman is the CEO of PRX, a company that’s shaping the future of public media content, talent and technology. PRX is a leading creator and distributor, connecting audio producers with their most engaged, supportive audiences.

Kerri is a fierce champion for innovations in podcasting, new financial models, and audience growth. She has been a non-profit executive for over 20 years, focusing on financial management and business development. She played a key role in the building and evolution of PRX, and headed up the launch of Radiotopia, a podcast collective of 14 diverse, independent, story-driven shows, anchored by 99% Invisible from Roman Mars. She is active in her community in Northfield, VT where she lives with her family.

Maria Rice – Maria Rice is a Grammy-nominated highly accomplished and sought-after mastering and restoration engineer. She has mastered projects spanning a wide range of genres and worked on a number of Grammy-nominated albums. Her restoration skills are second to none, and her credits include restoring many of the widely acclaimed Numero Group albums. Maria has been responsible for the quality control on every project mastered at Peerless during her time here and is increasingly in demand as a primary mastering engineer by a rapidly growing roster of satisfied clients. Her exacting attention to detail and highly sensitive and discerning listening skills make her an invaluable asset to the studio. Her commitment to perfecting each project and tireless attention to the clients’ vision ideally reflect the Peerless philosophy of exemplary sound quality and customer service.

Maria’s listening intuition stems from a long-standing and finely developed musical sensibility. She studied classical piano for fifteen years, winning several competitive awards. She is also enthusiastic about electronic music and composes in her own studio.

Lady Pills – Featured on the Lollapalooza tour and recently nominated for a Boston Music Award, Lady Pills have a singular yet multi-faceted voice. Informed by their time in the Boston DIY community, Lady Pills’ unique perspective on the scene, social responsibility and life in the 21st century is felt in their music and at their shows.

“Nominated for new artist of the year, It’s the rare band that can absolutely clobber you with distortion and woo you with a sweet melody at once.”- Boston Herald

Sarah Register – Sarah Register is an acclaimed mastering engineer working in NYC since 2001 on a wide spectrum of genres. She’s mastered artists from Andrew WK to Lee “Scratch” Perry as well as multiple Grammy nominated records, is a longtime champion for independent artists, and lends a unique compassion to the artistic process.

Chiquita Paschal – Chiquita Paschal is an associate producer for Uncivil. Chiquita was previously a producer on BuzzFeed’s Another Round and the founding program manager at PRX’s Podcast Garage in Boston after several years of working in local and national news, including NPR’s Morning Edition.

Susan Rogers – Not only is Susan Rogers a record producer, engineer, mixer, and audio electronics technician, she has a doctorate in psychology (having studied music cognition and psychoacoustics) from McGill University. As an engineer Susan really got her start working with Prince from 1983 to 1988, including albums like Purple Rain, Around the World in a Day, Parade, Sign o’ the Times, and The Black Album. Her other studio sessions have included artists like Barenaked Ladies, David Byrne, Toad the Wet Sprocket, Rusted Root, Tricky, Geggy Tah, and Michael Penn. She is currently the director of the Berklee Music Perception and Cognition Laboratory, and is an associate professor at Berklee.

Amory Sivertson – Amory Sivertson is a Producer of New Programming for WBUR (which is just a snazzier way of saying she’s on their podcast team). She’s currently working on developing a new podcast that will be announced later this month and will launch in January 2018. She’s also one of the producers of Modern Love: The Podcast and the former producer of Dear Sugar Radio (now called Dear Sugars), hosted by Cheryl Strayed and Steve Almond. Previously, she was an associate producer and the studio director for WBUR’s daily, local news program, Radio Boston, hosted by Meghna Chakrabarti. Amory is also an independent musician, and she’ll release her fourth full-length album in the spring of 2018. Her earlier material can be heard at amorymusic.bandcamp.com.