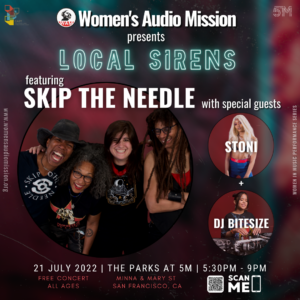 Location:
The Parks at 5M on Minna & Mary St. in San Francisco, CA

Featuring Skip the Needle, STONI, & DJ Bitesize at The Parks at 5M on Minna & Mary St. in San Francisco, CA.

Parking is limited. We advise you arrive by public transportation or rideshare service.
We also encourage bringing a picnic blanket for seating and layers for windy/foggy weather.
Public park rules apply.

Flaunting vicious flows, and a player-like persona, STONI can hold her own with some of rap’s top-tier artists. Born and raised in Oakland, the California native grew up with a passion for poetry and writing. Already making a lasting impression with her unofficial release “Kirk Franklin Freestyle” with friend Rayana Jay, Stoni is gearing up to take the Bay Area and the whole industry by storm.

Bitesize is a Pinay DJ from the Bay Area. Starting at 17 years old Bitesize owned a pair of turntables and a mixer, which began her -turntablism and mixing- DJ journey. Bitesize is a two-time DJ battle champion in the local Bay Area scene. She rocks numerous venues in the Bay from SF to SJ to LA and even out of state. Her sound is a mixture of new school to old school while adding flavors of all genres you can vibe and dance to with some turntablism tricks and scratches.

Go behind the scenes with DJ Bitesize here.